The Netflix Recommendation: Bill Cosby is a God

For a while there, I was thinking that I wouldn’t be able to continue this series as Netflix had apparently given up on me.  In fact, I can still say that, as Netflix only recommends to me around 30 titles (most of which I have no interest in), but that’s still better than when it was at about 6 titles a few months ago.  However, while I have more recommendations, they’ve veered-off from weird to the totally absurd.  And so, we have today’s recommendation.

The Recommendation: Jesus of Nazareth

Because I enjoyed: Bill Cosby: Himself 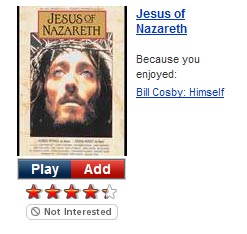 See, simply recommending a documentary on Jesus to me is silly to begin with.  I’m a proud atheist-leaning agnostic, and am allergic to almost all things Jesus.  But what makes this recommendation legendary, is that it was recommended to me because I liked a film of Bill Cosby stand-up.  Did I miss something?  Did Cosby recently declare himself the new Messiah?  Does Netflix know something I don’t?  Should I be worshipping at the altar of Huxtable?

I guess it’s time to start a new religion.  I’ll have to quit my job and start writing the Gospel of Cosby.  I wonder if I can become one of Cosby’s apostle.  From now on, call me Theo.

6 responses to “The Netflix Recommendation: Bill Cosby is a God”